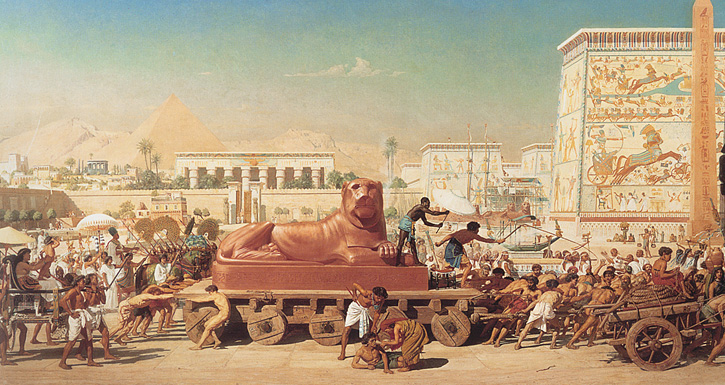 Numbers 11:4-6 “Now the mixed multitude who were among them yielded to intense craving; so the children of Israel also wept again and said: “Who will give us meat to eat? We remember the fish which we ate freely in Egypt, the cucumbers, the melons, the leeks, the onions, and the garlic; but now our whole being is dried up; there is nothing at all except this manna before our eyes!”

We often wonder why we have so much trouble letting go and giving all of ourselves over to God. Truth be told, we still crave the leeks and onions in Egypt.

The Israelites in the wilderness let their stomachs get ahead of their minds. The Egyptians had enslaved them for many years. They had no freedom. Their lives were engulfed in pagan idolatry and were worshipping other gods. In their depravity, God showed many signs and wonders so they knew He still existed. A whole sea parted before their very eyes and they were able to cross on dry land. When they were hungry and thirsty He provided. Clearly, God protected them and provided them with His love.

But that was an unfamiliar thing for them. To have God care about them so much, even in their own sin. He provided them freedom, miracles and wonders to protect them, as well as food and drink to sustain them. But that wasn’t enough. They started thinking about the food they freely ate in Egypt. Surely it was freedom for their stomach, but not for their lives. It was familiar to them and they craved it. We tend to follow the same trend.

What are the leeks and onions in our lives? Anger, relationships, business, lust, money, food, etc.? There are many of these things in our lives that keep us from living up to our potential in Christ. They bog us down. They create depression in us. They create a large vast space between God and us.

To think that once upon a time, God communed with man face to face. Till the day we hid ourselves behind the trees and bushes and covered our nakedness with leaves. We ran far away because we knew we were naked. We hid because we were ashamed. Instead of coming to the One who could clothe us with His righteousness, we looked around for errant ways to mask the bone-deep problem of sin.

Yes, we all have that disease. We can cover it, hide it or ignore it but it still exists in our mortal bodies. Man has no cure for it, just a bunch of pills to cover up the disease. The potential to sin exists in our hearts, minds, and bodies till we die. So how do we cure this disease? How do we make sure it doesn’t creep into our lives?

There was this Jesus who was God and became man, yet still God. He walked the streets of this earth and sought to save those He created. But more than that, He was God and came down to be with us – Eternal to commune with mere mortals. Who has ever heard of a God who has done that?

But a God that planned to sacrifice Himself for us? A God who knows how many hairs are on our head, daily because mine are coming out regularly! A God who loves us so much He is willing to risk eternity for us. A God who is willing to take the hands of mere mortal man and help him along the way, errors and all.

This is so much for us to grasp. In our relationships with other humans we strive to be accepted. We pay our bills so our creditors will accept us. But God accepts us as we are and where we are while helping us to live free from sin and its effect on us. But is that our desire – to be free from that disease called sin? Some say we can never be rid of it so they continue in it. Some just don’t know the power of God.

We hold onto the leeks and onions in our lives because they are familiar to us. Unconditional love is not very familiar. Naturally we question it and have a hard time reproducing it. So we continue to hide behind the trees and bushes, cover our shame and swallow those pills. We look at others and see their shame and we uncover it because it takes the focus off ourselves. But it is only a distraction. Soon after, we look into the mirror and see the same shame.

Jesus drank the cup of wrath for us on the cross as spoken of in Revelation 14. It wasn’t the nails or the mocking He endured that saves us. People had died in worst ways for others since the cross. Yes, they were things He endured for our sake but it was the guilt and shame on account of our own sins that killed Him. He started to drink that cup of wrath in the garden of Gethsemane (Matthew 26:38-39).

The overwhelming shame…the overwhelming guilt…it is too much for man to endure. We would die instantly if we had to feel the full power of all of our sins at one time. When Jesus comes again, the wicked call for the mountains and rocks to fall on them because it is too much to handle. That is what Jesus bore for us, plus every sin that has ever been committed and will commit by everyone.

He has provided the way. He has paved the path for us to be set free from sin. “For we are His workmanship, created in Christ Jesus for good works, which God prepared beforehand that we should walk in them.” Ephesians 2:10

When we decide that we want to control something in our lives because it makes us feel good or that it is comfortable, even though it is bad for us, we deprive God of working to His fullest potential in us. Some don’t want to face the idea that they should be living a life unto God in every aspect of their lives. With every addiction, with every struggle, with every aspect of our lives, do we want God to take control? How about us giving up the leeks and onions of this world and give God a try?

Romans 6:1-4 “What shall we say then? Shall we continue in sin that grace may abound? Certainly not! How shall we who died to sin live any longer in it? Or do you not know that as many of us as were baptized into Christ Jesus were baptized into His death? Therefore we were buried with Him through baptism into death, that just as Christ was raised from the dead by the glory of the Father, even so we also should walk in newness of life.”

We Remember
Orchestrating the Truth