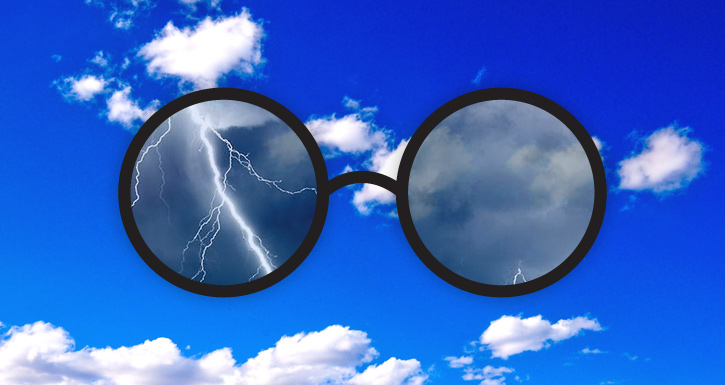 de·cep·tive: intended to make someone believe something that is not true. (a)

So I watched my first Harry Potter movie the other day. I’ve typically stayed away from those types of movies because of the “magic” stuff. But considering the enormous following, even among Christians, I was curious as to why it was so popular.

Some think that Harry Potter is harmless and they promote this type of literature and entertainment as no big deal. The divination instructor from the movie, when addressing the students, said the phrase, “Noble art of divination.” Noble? Is this the type of information you want to instill in your children? Noble? How can divination be noble?

Harry Potter is full of these practices and choosing it as entertainment for our eyes and ears is something the fallen one is excited about. Why? Because what we absorb into the mind that is evil under the guise of good blurs our vision of our good God.

I get it. We all love good vs. evil and relish when “good” wins. However, Harry Potter’s “good vs. evil” while using evil in good is actually pretty evil. And trivializing this fact, from a Christian perspective, is irresponsible. Don’t believe me? Read the following Scripture passages and get a feel of how God feels about these practices. If God feels that this is wrong, shouldn’t we see through the eye glasses of Scripture rather than the deceptive eye glasses of Hollywood?

“I will set my face against anyone who turns to mediums and spiritists to prostitute themselves by following them, and I will cut them off from their people.” -Leviticus 20:6

“When you enter the land the Lord your God is giving you, do not learn to imitate the detestable ways of the nations there. Let no one be found among you who sacrifices their son or daughter in the fire, who practices divination or sorcery, interprets omens, engages in witchcraft, or casts spells, or who is a medium or spiritist or who consults the dead. Anyone who does these things is detestable to the Lord; because of these same detestable practices the Lord your God will drive out those nations before you. You must be blameless before the Lord your God. The nations you will dispossess listen to those who practice sorcery or divination. But as for you, the Lord your God has not permitted you to do so.” -Deuteronomy 18:9-14

“For rebellion is like the sin of divination, and arrogance like the evil of idolatry. Because you have rejected the word of the Lord, he has rejected you as king.” -1 Samuel 15:23

“When someone tells you to consult mediums and spiritists, who whisper and mutter, should not a people inquire of their God? Why consult the dead on behalf of the living?” -Isaiah 8:19

“The Egyptians will lose heart, and I will bring their plans to nothing; they will consult the idols and the spirits of the dead, the mediums and the spiritists.” -Isaiah 19:3

“Then the Lord said to me, ‘The prophets are prophesying lies in my name. I have not sent them or appointed them or spoken to them. They are prophesying to you false visions, divinations, idolatries and the delusions of their own minds.'” -Jeremiah 14:14

“So do not listen to your prophets, your diviners, your interpreters of dreams, your mediums or your sorcerers who tell you, ‘You will not serve the king of Babylon.’” -Jeremiah 27:9

“Therefore this is what the Sovereign Lord says: I am against your magic charms with which you ensnare people like birds and I will tear them from your arms; I will set free the people that you ensnare like birds.” -Ezekiel 13:20

“The idols speak deceitfully, diviners see visions that lie; they tell dreams that are false, they give comfort in vain. Therefore the people wander like sheep oppressed for lack of a shepherd.” -Zechariah 10:2

“The Spirit clearly says that in later times some will abandon the faith and follow deceiving spirits and things taught by demons.” -1 Timothy 4:1

“Nor did they repent of their murders, their magic arts, their sexual immorality or their thefts.” -Revelation 9:21

“But the cowardly, the unbelieving, the vile, the murderers, the sexually immoral, those who practice magic arts, the idolaters and all liars—they will be consigned to the fiery lake of burning sulfur. This is the second death.” -Revelation 21:8

“Outside are the dogs, those who practice magic arts, the sexually immoral, the murderers, the idolaters and everyone who loves and practices falsehood.” -Revelation 22:15