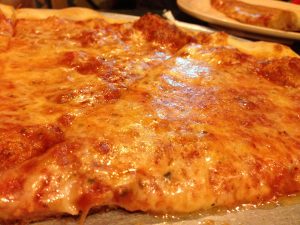 Picking apart food and only consuming bits of it is not a good way to eat. It either tells others that the food was not that good or the person is just too picky. If I were to fix a pizza for someone and they did not eat the crust, I would feel that the pizza was not good enough for them.

It makes me think about how God feels when people do not consume the entire Bible.

There are some who make claims that because Jesus specifically did not mention something then it is either OK or that it doesn’t matter. In this thought, the entire Word of God is eliminated, replaced by only the actual words that Jesus spoke. There are a lot of things He did and said that are not even recorded in the New Testament. “And there are also many other things that Jesus did, which if they were written one by one, I suppose that even the world itself could not contain the books that would be written. Amen.” John 21:25.

The problem with this school of thought, that we should only follow what is written that Jesus said, is that it is erroneous in nature and irresponsible. Did you know that before Jesus existed in the flesh He was the Son of God in all His glory? Did you know that the doctrine of the Trinity, which many Christian denominations believe and is backed up by the Bible, is that there is God the Father, Son, and Holy Spirit – a unity of three coeternal Persons? These three are not separate thoughts, but They are three, unified in purpose (Gen. 1:26; Deut. 6:4; Isa. 6:8; Matt. 28:19; John 3:16 2 Cor. 1:21, 22; 13:14; Eph. 4:4-6; 1 Peter 1:2.).

It is dangerous to ignore all Scripture by choosing only the words of Jesus that were written down because it creates an entire system of beliefs that does not consider the entire Word of God. This is the folly of self-proclaimed “New Testament churches,” where they dismiss the Old Testament altogether. Jesus is the Word of God. The Scriptures were given by the inspiration of God. The purpose of Scripture is to reveal God and His purpose to mankind. Consider the following verses:

“In the beginning was the Word, and the Word was with God, and the Word was God. He was in the beginning with God. All things were made through Him, and without Him nothing was made that was made. In Him was life, and the life was the light of men. And the light shines in the darkness, and the darkness did not comprehend it. And the Word became flesh and dwelt among us, and we beheld His glory, the glory as of the only begotten of the Father, full of grace and truth.” John 1:1-5; 14

“He was clothed with a robe dipped in blood, and His name is called The Word of God.” Revelation 19:13

“And take the helmet of salvation, and the sword of the Spirit, which is the word of God;” Ephesians 6:17

“For the word of God is living and powerful, and sharper than any two-edged sword, piercing even to the division of soul and spirit, and of joints and marrow, and is a discerner of the thoughts and intents of the heart.” Hebrews 4:12

“And beginning at Moses and all the Prophets, He expounded to them in ALL the Scriptures the things concerning Himself.” Luke 24:27

“All Scripture is given by inspiration of God, and is profitable for doctrine, for reproof, for correction, for instruction in righteousness,” 2 Timothy 3:16

I hope these passages helps spur a more intimate approach to the entire Bible. We cannot say that we believe that Jesus is the Son of God and that the Bible is the authority of God while dismissing parts of the Bible itself. I can’t imagine how God feels when someone approaches Scripture that way.

We must consume the entire Pizza… It is very good!