The Blame for Gun Violence 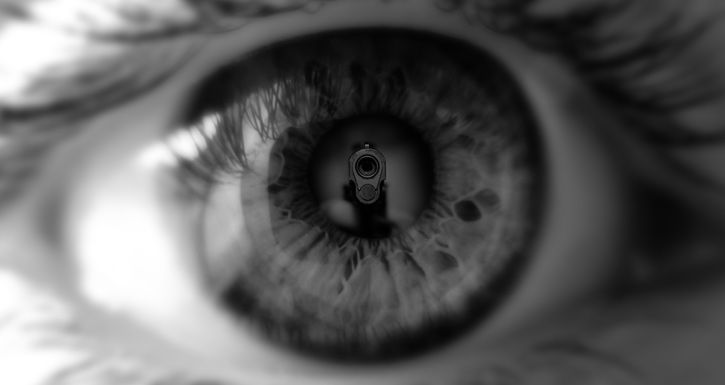 I want to walk through a thought process here and don’t want you to jump to any conclusions by the first few paragraphs of this post. The end result of this post will probably surprise you so stay with it. I’ve tried to keep an open mind with this subject and will provide my input as a US citizen and then as a Christian.

Gun violence is all over the news. Murder rates are rising in many US cities. The right to own a gun is a polarizing subject and it usually comes up when there is unnecessary violence involving guns. The argument typically involves people who never want to own a gun vs. people who already own guns. Whenever there is a death of another person, particularly an innocent person, by the use of a gun… many will jump to want to eliminate guns out of the hands of ordinary citizens. “Guns kill,” they say. Somehow the thought is that if there were no guns in the hands of citizens, innocent lives would not perish.

In Chicago, where some of the strictest gun laws in US are, the gun laws have basically kept guns out of the hands of decent citizens who want to protect themselves. Meanwhile in 2015, Chicago’s homicide rate has climbed 19% and shooting incidents are up 21% so far (Madhani).

They say guns don’t kill people. Dads with pretty daughters kill people.
Outlawing drugs hasn’t kept people from selling, buying, and using drugs. Do you think outlawing guns will keep bad people from killing others? Are we going to outlaw cars because some people kill others with them? Once people start killing others with knives (example), what are we going to do then? Outlaw knives? Many carnivores of this world will go crazy trying to eat their steaks using a fork and butterknife. Should we ban baseball bats once people start using them to kill others on a larger scale? Where does it end? I don’t believe guns kill people. I believe people kill people. Pencils don’t misspell words, people do. Food doesn’t make people overweight. People make people overweight.

The thought process from people who don’t want others to own guns stem from a fear of guns being handed to the wrong people. Ok, I get it. Nobody wants that. But let’s apply that argument to driving in FL. You could easily say that cars should not be in the possession of seniors because they may get into an accident. You can’t let fear run your ideology because then innocent people get disenfranchised.

From a US citizens’ perspective, there is a lot of history for why people have the right to bear arms. The founding fathers knew this as they had a fresh memory of persecution by the State. Once a State removes the ability for its citizens to arm themselves, then what will follow is a government that will not be afraid to do whatever it wants to. All we have to do is look back on history and see that we cannot trust our government to be pure in thought. Some people have this fantasy of an idea that our country would never be evil in its intent. I would just ask you to open your history books and take a look for yourself.

Does that mean I think it is OK for my neighbor to own a rocket launcher? No. I wouldn’t feel comfortable having a neighbor owning a semi-automatic rifle. To some people, having a gun provides a sense of power. To others, it provides a sense of protection. I think there has to be some reasonable control, but elimination of the right to bear arms is not an option from my US citizen perspective. In the news media, you typically hear the bad stories of people owning guns, but you will rarely see the stories of people protecting their families or stopping a very bad situation from getting worse. The reason is when an innocent person dies because of someone with a gun, it is more polarizing for the news media to report it and gets more attraction, therefore creating more advertising revenue for the media outlet.

Disclaimer: I used to own several guns. I do not own a gun anymore nor do I ever want to own a gun again. I don’t even feel comfortable around people with guns. I have my own reasons for this and in no way am I condemning other people’s rights as US citizens to own guns.

I understand I do not represent all Christians so I will speak for myself and what I believe. I do not want to seek protection from a gun. I want my protection and trust to be in God. Trusting in a gun to protect me is one step further away from trusting God to protect me.

There is a misperception that is often repeated that says, “God wants us to protect ourselves,” (or some variation of that statement) and this is often used as a backdrop to own guns and put trust in ourselves. It’s not even biblical. God didn’t make Adam and Eve with gun holsters. God asks us to put our trust in Him. “The God of my strength, in whom I will trust; My shield and the horn of my salvation, My stronghold and my refuge; My Savior, You save me from violence.” 2 Samuel 22:3

You say, “Look in the Old Testament and see God’s people with weapons against other tribes and nations.” True. But God never meant it to be that way. It was the people’s desire to be like the other nations around them and their lack of faith in God to protect them that fueled this mentality.

So all the elders of Israel gathered together and came to Samuel at Ramah. They said to him, “You are old, and your sons do not follow your ways; now appoint a king to lead us, such as all the other nations have.” But when they said, “Give us a king to lead us,” this displeased Samuel; so he prayed to the Lord. And the Lord told him: “Listen to all that the people are saying to you; it is not you they have rejected, but they have rejected me as their king. As they have done from the day I brought them up out of Egypt until this day, forsaking me and serving other gods, so they are doing to you. Now listen to them; but warn them solemnly and let them know what the king who will reign over them will claim as his rights.” But the people refused to listen to Samuel. “No!” they said. “We want a king over us. Then we will be like all the other nations, with a king to lead us and to go out before us and fight our battles.” When Samuel heard all that the people said, he repeated it before the Lord. The Lord answered, “Listen to them and give them a king.” -1 Samuel 8:4-9;19-22

Look at the example with Gideon in Judges 7, where God kept telling him he had too many men for battle and then eventually God caused the Midianites to turn on themselves and they killed each other. God displayed to Gideon that He does not need His people to take up arms to protect themselves. God showed that He was their Protector, but over and over His people rejected Him as such.

Violence is because of the moral decay of society

“But know this, that in the last days perilous times will come: For men will be lovers of themselves, lovers of money, boasters, proud, blasphemers, disobedient to parents, unthankful, unholy, unloving, unforgiving, slanderers, without self-control, brutal, despisers of good, traitors, headstrong, haughty, lovers of pleasure rather than lovers of God, having a form of godliness but denying its power. And from such people turn away!” 2 Timothy 3:1-5

The above passage is prophetic in that it depicts how our society will be in the last days. The problem with violence does not stem from guns being in the hands of the wrong people. It stems from a moral decline of our society and a lack of faith and trust in God. Just look around us and you will see it in focus. It is obvious that the moral decline and acceptance of what is not holy has numbed our minds as to what is right. It has created a vacuum that has us sucked into unthankfulness, disobedience without regret, and where self-control is lacking. The desires of the flesh are winning and whatever feels right, people are doing it.

In the words of The Righteous Brothers, “You’ve lost that lovin’ feelin’.”
“And then many will be offended, will betray one another, and will hate one another. Then many false prophets will rise up and deceive many. And because lawlessness will abound, the love of many will grow cold. But he who endures to the end shall be saved.” Matthew 24:10-13

But with gun violence, it is the violent nature of people that is the main problem. If we want less violence in general in our society, curbing guns will not solve the problem. Loving our neighbor will do more towards curbing violence than any law has ever accomplished. We need a change of heart that is filled with the best interest of our fellow man and woman. Then and only then will we see the change that is desired.